My hold on this book came in a lot sooner than I was expecting, and I am pretty excited about it. 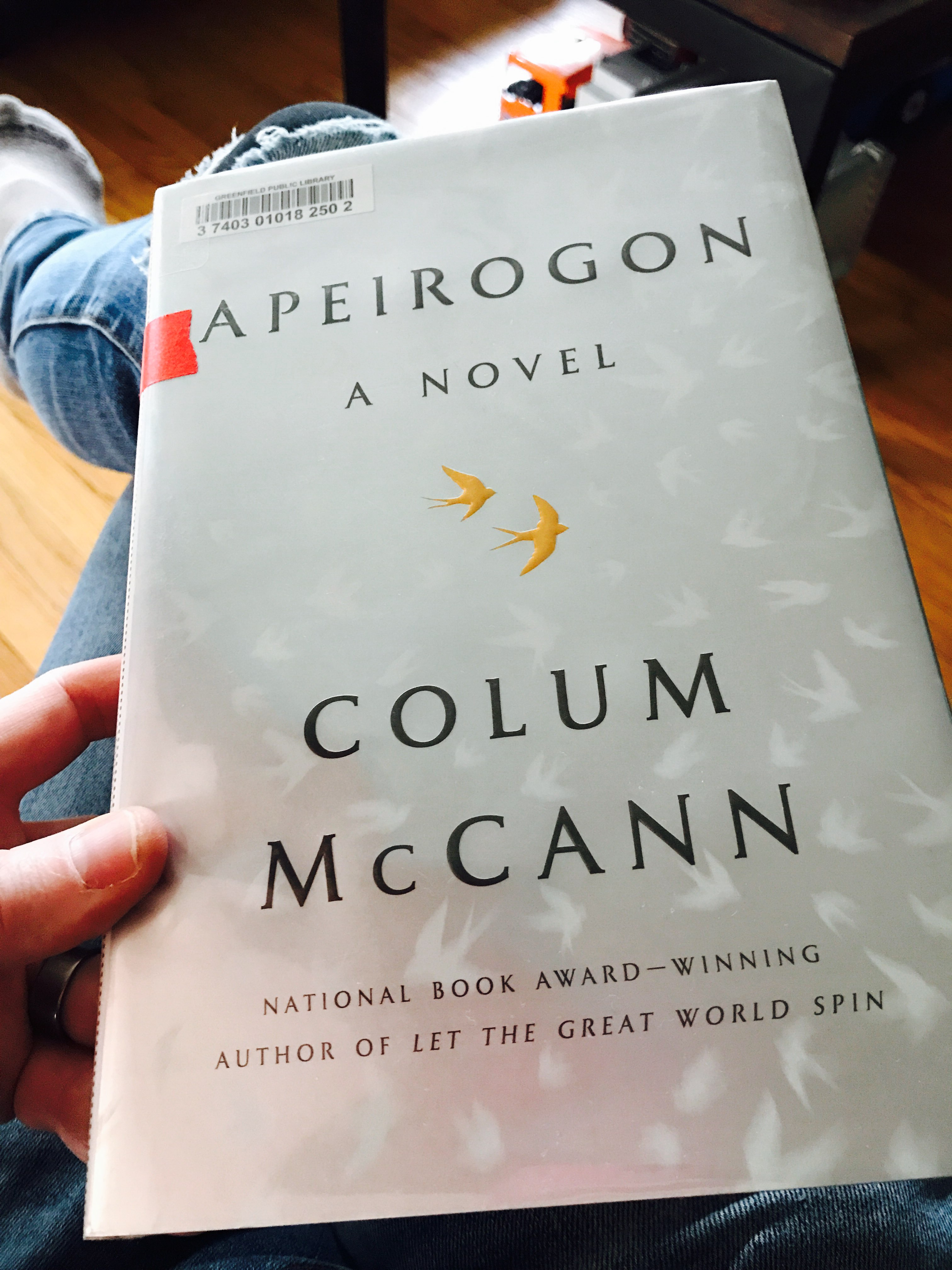 I am not generally a big fan of newsletters, but one to which I do subscribe and recommend is L.M. Sacasas’s The Convivial Society. Here’s a good example of why from the latest installment, in which he talks about trying to about trying to make sense of online commentary regarding the coronavirus:

The path down the rabbit hole is, I’m here to report, greased, and it takes absolutely minimal effort to find oneself on the edge, inadvertently slipping in.

It is true that this case has been something of a perfect storm for just such a state of affairs: an encounter with a novel, deadly phenomenon, emerging within a less than transparent social milieu. That could have described any number of previous moments in human history, of course. The difference is that digital media has added another critical dimension: digital patterns of communication accelerated, augmented, diffused, refracted the experience of crisis. Digital virality compounded the consequences of biological virality. Problems endemic to our information ecosystem have exacerbated the risks posed by a novel viral threat.

It is true, however, that as we gain a better understanding of the disease over time, it seems the acute nature of the specifically epistemic crisis wanes. And it does appear that this is beginning to happen, although there is still much that is contested and uncertain.

Unfortunately, this moment of pronounced anxiety was just one case of a more pervasive problem: we are increasingly moving into territory for which we have no map, and our use of digital media amounts to pushing hard on the accelerator rather than covering the break.

Elizabeth Warren and What It Means to ‘Believe Women’:

Power provokes trust; a comparative lack of power provokes suspicion. Consider that one of the only twisted contexts in which women’s claims of sexual harassment and assault have been consistently believed is when they have been leveled by (more powerful) white women — women who have often in fact been lying — against (less powerful) black men, then used as justification for racial violence and lynching.

But when Matthews expresses on television his absolute befuddlement at the idea that Bloomberg, a man who is running for president and who settled the legal claim brought against him by Garrison, would have a material interest in not telling the truth about a difference of opinion, he puts on display exactly the power dynamics that have left so many women who make claims of bias understood to be untrustworthy. And when Warren asks him in return, simply, why we shouldn’t believe the woman who has told the story of bias, she makes clear why the suggestion that we treat more women’s voices as legitimate doesn’t have to be a blunt and clumsy mandate in order for it to be a crucial step that could advance how we understand and correct abusive power dynamics.

I know I have mentioned this before, but I love that to this day, I still have the experience at least a few times a year of hearing a song and realizing “OH! That’s where they got that sample on Paul’s Boutique from!”

It just happened again this morning.

Periodically, someone posts a link to a list of all the samples on the album. I studiously avoid these references, because it sucks some of the joy out of it for me.

NYT: “They Saw Themselves in Elizabeth Warren. So What Do They See Now?”:

“I’m feeling really anxious, the same kind of anxiety as I had in 2016,” she said. “We’ve been in mourning all that time and now we’re starting over again. I might feel different if it were Warren doing well — maybe then I’d be more hopeful.”

Like most of the other women in the group, Ms. Raphael had participated in the Women’s March in 2017 and donated to women running for Congress in 2018. She had felt her enthusiasm flag more recently. She was still angry, but she was also weary.

“We can’t let the world get away with defeating us into exhaustion,” she said.

Whenever anyone talks about how the federal government should be “run like a business,” the scenario that runs through my head is something exactly like this:

Asked how many DHS was anticipating, Wolf didn’t have an answer and suggested this was the Department of Health and Human Services’ territory. “We do anticipate the number will grow; I don’t have an exact figure for you, though,” Wolf said.

“We will,” Wolf responded. He referred to a task force that is working on that issue.

“I’m all for committees and task forces,” Kennedy said. “I think you ought to know that answer.”

Things didn’t get much better from there.

This exchange is exactly the sort of thing you get with people who think government should be run like a business.

Think of any corporate meeting in which everyone in the room is heads-down on their laptops, and all the remote attendees have their video turned off and their audio muted until someone mentions their name and they answer “Sorry, could you repeat that?” because they weren’t really listening.

I’ve been that person plenty of time, because despite everyone’s pretensions, the stuff being discussed in these meeting is rarely ever high-stakes. Don’t know the exact status of that Q3 roadmap deliverable? “Let me check with the team and circle back to you on that” will suffice. The person presenting is probably just reading the bullet points off their slide deck anyway, and the whole thing is performative.

So, no—I definitely do not want the government to be run like a business, because the stakes are actually high, and peoples’ lives are at risk.

This is a debate I would actually watch:

Biden, nervous, tries to give Bloomberg a back rub but his hand sinks into the shoulder flesh which opens to chew Joe’s arm off at the elbow; Bloomberg separates into 14 flesh crabs and all the contenders realize he is the Thing. Warren has a flamethrower.

The Radicalism of Warren’s Unapologetic Aggression | The New Republic:

As a female candidate, you’re supposed to ground any aggression you might have in your motherhood, not the childhood that people of all genders share. But Warren, at the end of the debate, didn’t grin sheepishly and say, “Well, I’m a mom after all.” She claimed her kills, and promised American families to go out and fell fresh targets in their name. Here was an assassin, bathed in the blood of her enemies, turning steady eyes to the TV camera and offering her talents to the public: For the small price of a primary vote, this assassin will work for you.

Warren’s skillful Bloomberg disembowelment was clearly gratifying for many people other than myself, as evidenced by her campaign’s report that this debate provided her single best hour of fundraising. But as exciting as it may be to imagine the entire race being reshuffled because of her debate performance, we’ve been down this path before. This is how it goes: Warren wins the debate; people love her and say she’s their second choice. But stymied by sexist fears instilled by cable news pundits who protest that someone, somewhere, may find a woman unelectable, too many people still hesitate to vote for her.

Instead, this is likely to be one of those cases where a woman does the work and a man reaps the benefits, with the man in this case being Bernie Sanders. He’s clearly in the lead after the Iowa and New Hampshire contests, but not by much. There’s still a risk that panicky voters decide he is also not electable and go with someone else instead. But thanks in large part to Warren’s takedown in Vegas, Bloomberg’s ability to muscle in and intimidate voters into thinking he’s got the juice has been significantly damaged. Which just helps clear the field even more for Sanders to pull ahead.

Perhaps the more toxic members of Sanders’ fanbase, who have been tweeting snake emojis at Warren in recent weeks, should instead feel some gratitude and tweet something more appropriate at her. I recommend the heart-eyes cat emoji.

I feel like all the pundits that have spent the last month talking up Bloomberg's candidacy are the same bunch who were going on in the early 2000s about how great a presidential candidate Giuliani would be.