“What kind of robots are you?”

This RescueBots show is surprisingly entertaining.

Ten minutes in, and this Rim Of the World movie is garbage. Back to The West Wing.
Two albums I have run across this week from bands I’ve never listened to:

They are both quite good, and I am now going down a rabbit hole with both bands, who were mainly active in the late 1980s and early 1990s.

On a side note, I have been pretty impressed with the improvements to Apple Music’s “For You” tab, which is where I ran across both albums.

I agree with my Representative:

Those coming out in favor of impeachment seized on that line and others to claim that Mr. Mueller was making as explicit an impeachment referral as he could.

“We’re beyond talking about this in terms of political implications,” Representative Jim McGovern of Massachusetts told WGBH radio in Boston, endorsing an impeachment inquiry. “We have to do what’s right.”

Rarely a day has passed in the last 6-8 months when I have not flipped back and forth on whether Trump should be impeached. His conduct and his obvious unfitness for the office make it clear that, objectively, he should be impeached. However, with a Republican-controlled Senate that appears all but certain not to convict him, impeachment is fraught with practical political risks.

The position to which I am slowly coming around is that impeaching Trump will be messy, painful, and potentially disasterous. However, all the likely alternatives are worse.

As it turns out, that position aligns fairly well with my sense way back in November 2016 that our best hope was damage control and finding the least terrible option.

Robert Mueller saying “If we had had confidence that the President clearly did not commit a crime, we would have said so” on live television (and then in video clips that are shared far and wide and watched repeatedly) is decidedly not the same thing as those exact same words buried in the text of a 400+ page written report.
I will be spending the next thirteen minutes preparing myself to be disappointed by Bob Mueller’s public statement even if it is supposed to be “lengthy and substantial.”
Josh Marshall, in a TPM post about Trump’s chances of reelection in 2020:

It is also true and frankly commonsensical that the strength of the economy is a big, big factor in a President’s reelection chances. This is hardly surprising. Indeed, it’s often been argued that President Clinton survived impeachment because he was then overseeing a strong economy. I think this judgement is largely wrong. The economy got brought into it because a lot of the elite national media was deeply invested in a resignation narrative that never came to pass. So the economy and moral decline got hauled in as the explanation.

The reality is simple. If this is a normal election and if the economy and incumbency have their normal effects on the outcome of a US presidential election Trump will not only win but win decisively.

I tend to agree with Marshall, but I’m not sure he’s right on this one.

The general public is not obsessing over political minutiae and policy. They engage with politics on a broad emotional level. That’s why Clinton didn’t get impeached, and I think it’s why, despite his bad polling and obvious unfitness at every possible level for the office of the president, Trump is likely to be reelected in 2020.

Impeaching Trump Is a Refusal to Accept the Unacceptable – The Atlantic:

I have returned again and again in recent weeks not just to the Lyceum Address, but also to Albert Camus’ The Rebel—the philosopher’s attempt to grapple with what it means to live morally in an absurd world. For Camus, the foundational human experience is one of outrage: a “fruitless struggle with facts,” an “incoherent pronouncement” of pain and frustration with injustice.

Camus’ reasoning can apply to an almost endless range of situations, from frustration with a corrupt political regime to rage at the inevitability of death and the silence of God. Much is absurd about the Trump administration in a colloquial sense: Consider the spectacle of a tweeting commander in chief, the most powerful man in the world spending his time insisting on falsehoods and sniping over obvious insults. But his presidency is also absurd in the philosophical sense. What better to emphasize the gap between the desire for the Constitution to mean something and the reality of the document as some words on paper than the scene of Donald J. Trump swearing an oath to “faithfully execute the Office of President of the United States, and … preserve, protect and defend the Constitution”?

The Constitution is what Camus would call a “closed universe”—a space of “coherence and unity” in an incoherent world, in which words carry weight and actions have consequences. Trump’s disrespect for the law is a reminder of how fragile that structure of meaning can be. For that reason, there is a real service in using impeachment proceedings to push back against the notion that, in the parlance of the internet, “lol nothing matters.”

While I am generally happy with my return to Field Notes after trying out some other brands of pocket notebooks, I can’t say as I am thrilled with these particular limited editions I happened to get. With their glossy covers, they tend to slide out of my pocket with disturbing ease. 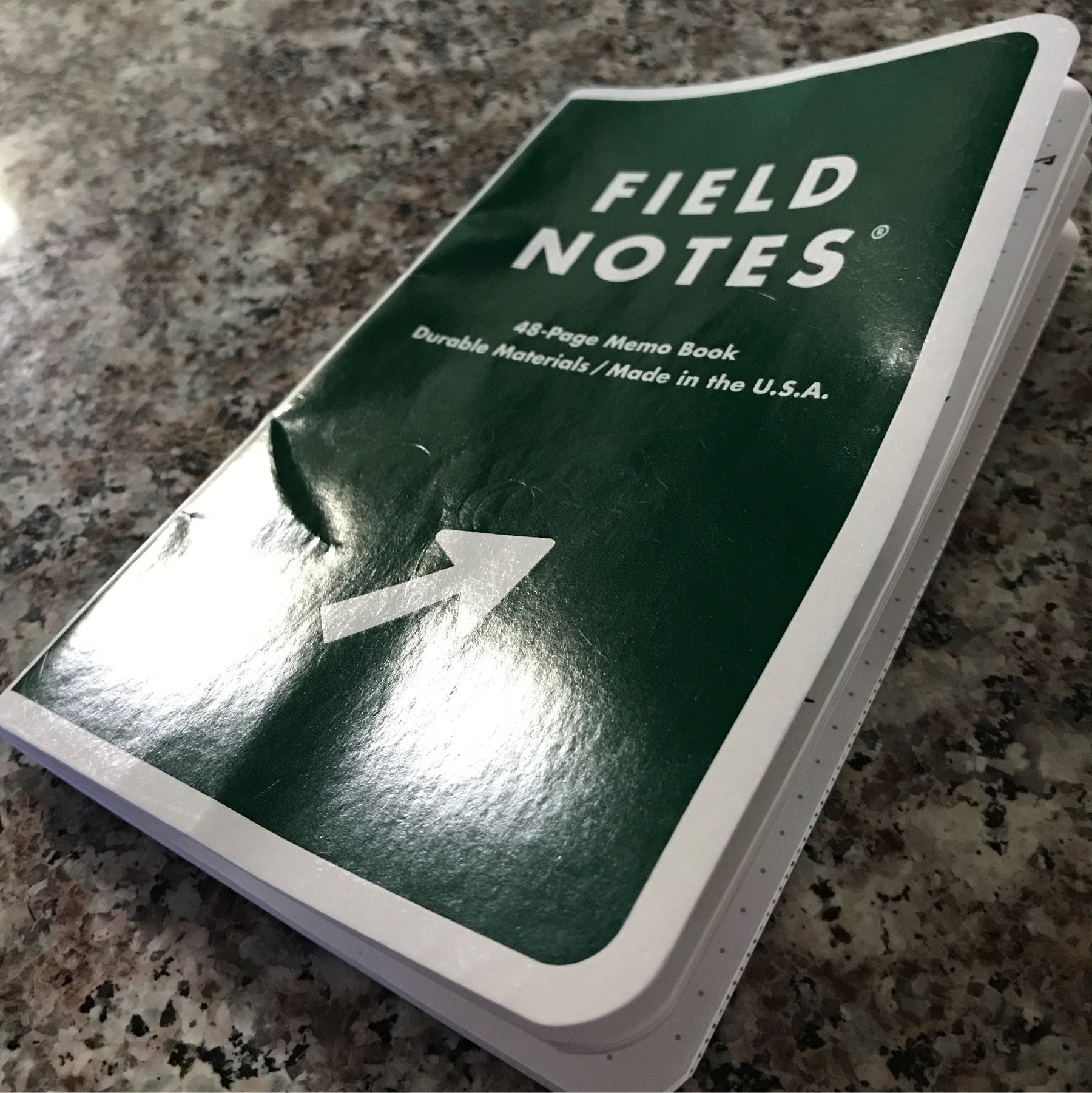 If the last few years have been a race between Trump’s malevolence and his incompetence, I have mostly felt like the incompetence has been winning.

While neither outcome is great, it is the incompetence that is the better of the two alternatives.

Lately though, especially with John Bolton and William Barr joining the administration, I feel like the malevolence is starting to take the lead. It helps to explain why my sensation of “Everything is terrible and getting worse” seems to be accelerating over the past few months.